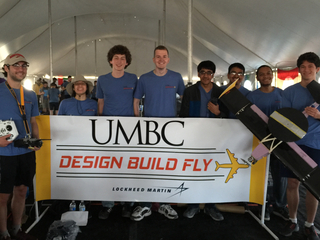 ME S-STEM scholars Micah Nissy and Juan Fernandez are members of the UMBC Fly team.  They recently went to Tuscon, Arizona to compete in the 23rd Annual AIAA Design, Build, Fly Competition.  More than 140 teams from universities in the US and oversea submitted their designs.  The team from UMBC is one of the teams that made through the last stage of the competition.  Their final ranking of 50th is a significant improvement from their last year's performance in the competition. They built a better airplane, scored higher in their technical report, and learned more about airplane design.  They also beat fly teams from universities which have better resources, including Cornell, Johns Hopkins, Purdue, and Stanford.  Congratulations!
0 Comments (requires login)